“Opportunity is often missed because it comes dressed in overalls and it looks like work.”
Thomas Edison

The video version of this article is below. Skip the video if you prefer reading instead.

Three weeks ago, I posted my first video for There’s Art to Data Science. Since then, I’ve been busy trying to figure out a way to teach myself the basics of Data Science in the fastest, most efficient way. I also have been working on putting together a daily show with news relevant to the Data Science field.

I haven’t worked this hard in years. I even gave up my daily bike rides, which is a big deal since I haven’t missed any rides in about three years. I rode at least 7 to 10 miles every day no matter how sick I was or how bad the weather sucked. But now, I’m taking a break from bike riding because this Data Science adventure is very important to me. 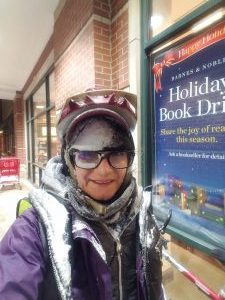 So, a lot of hard work, but very little to show for it. Most of the time, I feel like a squirrel hit by memory loss: I’m frantically running around with no idea what I’m looking for.

I’m getting less confused though. I’m starting to recognize names of companies, of people, of technologies. The landscape of Data Science is not completely foreign territory any more.

I’ll start posting my news show on Monday, January 21st. It won’t be as high quality as I want it to be, but I still think it will be interesting to watch.

This post here is more for venting. And maybe for helping other Data Science students feel less frustrated about being ignorant and about the slow pace of progress. It’s also for letting my readers know that I’m still alive … for now … barely.

Before I end it, I’ll share a short story I came across this week. It’s about baseball team San Francisco Giants and their recent hire, pitch analyst Matt Daniels. 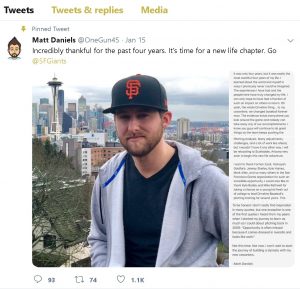 There are three things I liked about this story:

1. An article in theathletic.com said that the Giants’ choice was less about data and analytics, and more about the growing need for middlemen, translators who can stand between the analysts and the players on the field, and bring the two sides together.

This reminded me that, when I’ll be an expert Data Scientist, I shouldn’t forget to make Data Science as easy to understand as possible. Non-experts appreciate that.

2. In his Twitter feed, Matt Daniels thanks the company he used to work for, Driveline, for taking a chance on him years ago and giving him the kind opportunities that led to the position with the Giants, which he calls a dream job.

Here’s what he says:“To be honest, I don’t really find inspiration in many quotes, but one exception is one of the first quotes I heard from my peers when I started my journey to learn as much as I could about pitching back in 2009: ‘Opportunity is often missed because it comes dressed in overalls and it looks like work.’

Not this time. Not now. I can’t wait to start the journey of building a dynasty with my new coworkers.”

I like that quote because that’s how I feel about Data Science: I can’t want to build a dynasty in my new career.

3. The third thing I liked about the story is something else Matt Daniels said. It’s about Uber drivers and focusing too much on the data. He said: “Your Uber driver will drive right past you to “the spot” instead of looking up to see you there on the side of the road. If we focus in too hard on the numbers, we forget to look up and see what’s actually happening.”

Well, I hope you didn’t mind my little venting.

Thank you for being here. Keep working hard on your own projects and feel free to drop me a line and share how you’re doing.